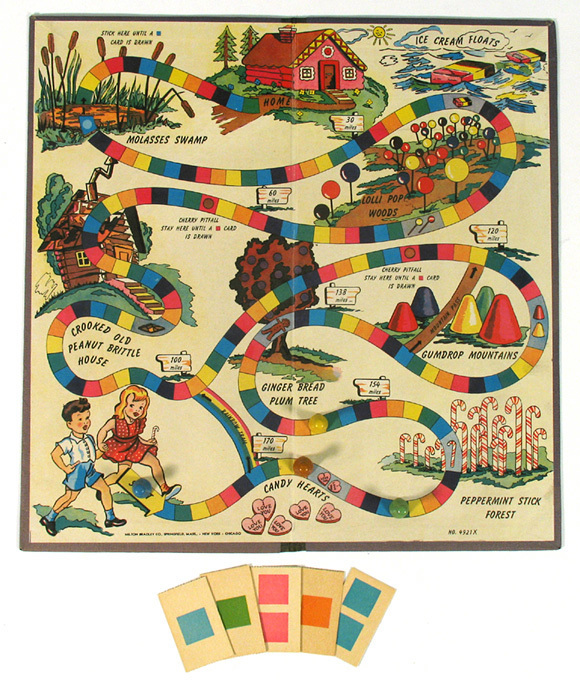 Note: I intended to playtest these rules before posting, but have not really had a chance yet. So this is all theory and no practice. I can’t tell you how fun it is. After I playtest it I will remove this notice and update the rules if neccessary.

This is my first post in a series called the No Added Pieces Project, or NAPP. This project creates new rules for familiar games using only the pieces found in the standard box. The first game getting this treatment is Candy Land.

Candy Land, for those who don’t know, is a simple children’s game that requires no particular skill to play. It generally teaches children about colors, counting, and rules-oriented games.

Out of the box, the rules are simple:

Those rules work great when you’re playing with young children who have not learned how to make reasoned decisions in their games, because you’re required to make none. The game merely unfolds according to the order of the cards. If no errors are made while drawing the cards, how the game unfolds is set at the moment the game starts.

My alternate set of rules not only provides meaningful choices to each turn, it provides a means of players working to advance their own piece while hampering the advancement of their adversaries.

The Chocolate Mountains and Lollipop Forests have been quiet for the entire history of Candy Land. Now King Kandy, blind and legless, lies dying in the Candy Castle. Prince Swirl is lost somewhere in the depths of the Ice Cream Slopes and presumed dead. With no successor, chaos roils in the court. (more)

Candy Land Wars introduces an array of options on how to use cards, when cards are played, and player interaction.

Order of Play on a Turn

A non-pink card may be played to advance your own piece or to move an enemy piece in reverse according to the color rules. Pink cards may be played on any player to send the player to the indicated space.

Players are immune to being sent backwards by their matching color.

Players that land on a bypass space must travel along the path, whether it is forward or backwards.

A player that begins their turn in a licorice trap and was not trapped in the same space the previous turn must forfeit their turn.

The game is won when a player has advanced to the Candy Castle and played one of each non-pink color card on their victory stack.

If a player is reversed out of the castle, their victory stack remains. They must advance back to the Candy Castle in order to add to it and win the game.